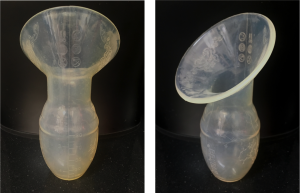 This unassuming little manual breast pump is a game changer!

I initially heard about the Haakaa in NCT classes but didn’t actually buy it until Mr Small was about 2 months old – I definitely wished I’d done so earlier!

More of this in an upcoming ‘Handy Hacks’ post but once we were in a routine I was pumping in the evenings with my Haakaa, so that my other half could do the dream feed when we went to bed.

The Medela Swing electric pump is great BUT I had 2 issues with my own pumping schedule:

The Haakaa completely changed this.

The way the Haakaa works is that you can just create a suction vacuum and let it do its job – no actual ‘pumping’ to be done. This meant that I could just attach the pump to one side when either Mr Small was feeding or I was using the Medela Swing on the other.

NOTE OF CAUTION: watch out for tiny flying limbs…. Spilt breastmilk is really something that you really can end up crying over.

The other added bonus of the Haakaa pump is that it’s so transportable and you can just pop in in your handbag…. Not something you initially think of as a key attribute of a breast pump but I used it in the most unlikely situations (under a well placed scarf or shawl)….

OBVIOUSLY THE HAAKAA IS ALSO SILENT… which is fairly essential in the above situations! I would add that I didn’t collect as much milk with just the Haakaa by itself as I did using it while feeding or pumping with the Medela Swing but it absolutely fitted the bill when needed!

The Haakaa pump is available to purchase on Amazon, do let me know if you have any questions.

Some of the links in the above post may be ‘affiliate links’. This means that if you click on the link and purchase the item I will receive an affiliate commission. Regardless, I only recommend products or services that I personally use and believe will add value to my readers.

Swapping the big smoke for the countryside... and taking Mr Small along for the ride